I hadn't really thought about what I was going to do with the other side of the hallway when I built the linen cupboard and wallpapered the area behind the bathroom. 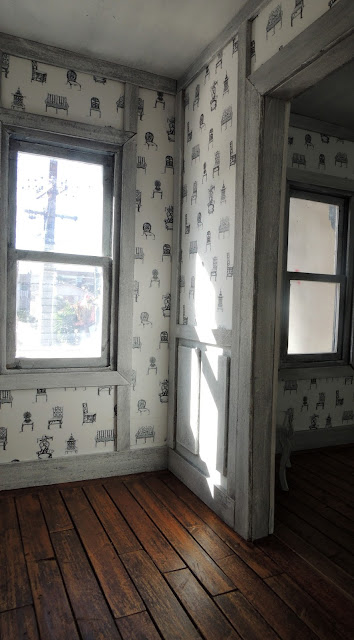 So when I started on this area things were a little tricky...one reason being that I had very little of the chair wallpaper left. 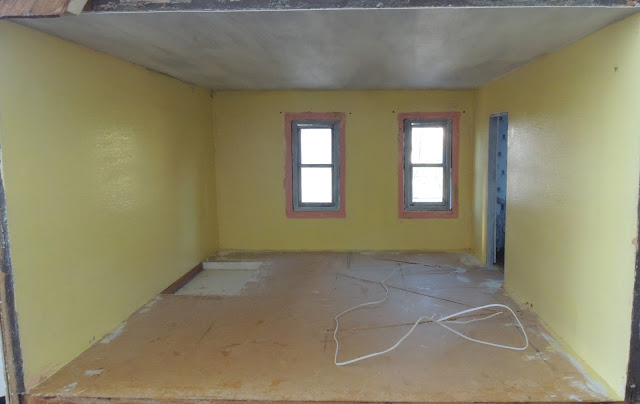 Here is the room next to the bathroom.
The stairs from the lower level will come up just between the windows so there will be a hallway in the back right corner. 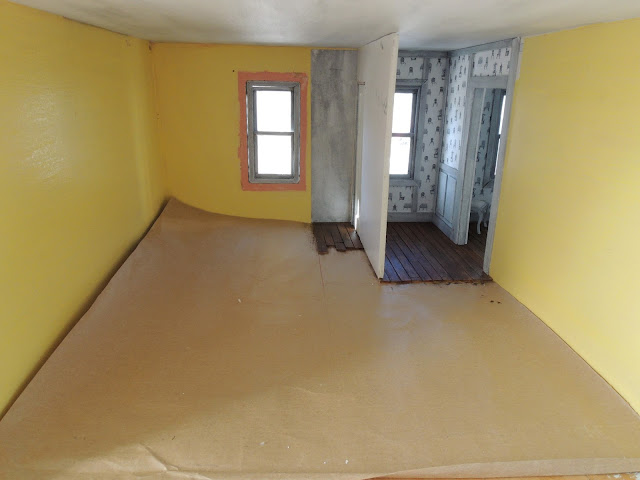 The rest of the room will be a bedroom. 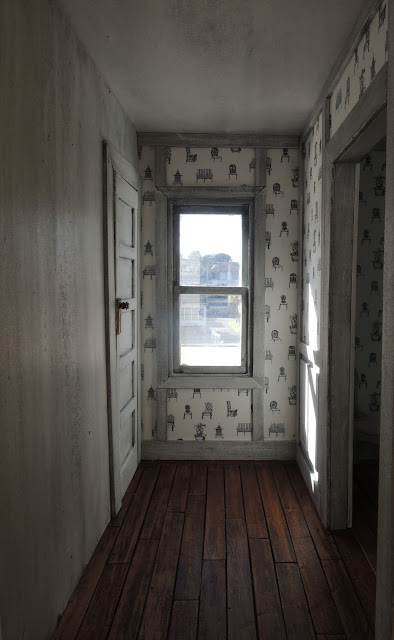 I used almost every last scrap I had of the one sheet of wallpaper I bought when I visited Kim.
The door on the left is where the stairs come up from the entry hall below. There wasn't going to be a door there until I realised you could see into the stairwell through the window. There's not really going to be any stairs in there so I built a door. 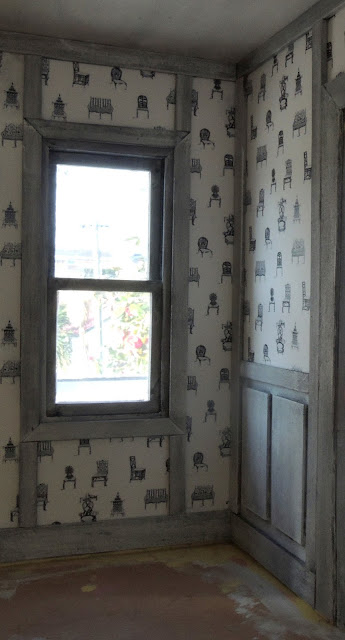 Thank goodness for wall panelling! That was one way to make the wallpaper go further.
There wasn't really enough wallpaper to do the two strips down either side of the window however I had wallpapered the end of the stairwell behind the bathroom - where it was never gong to be seen - so I carefully pulled the wallpaper off. I had to join a couple of small pieces. 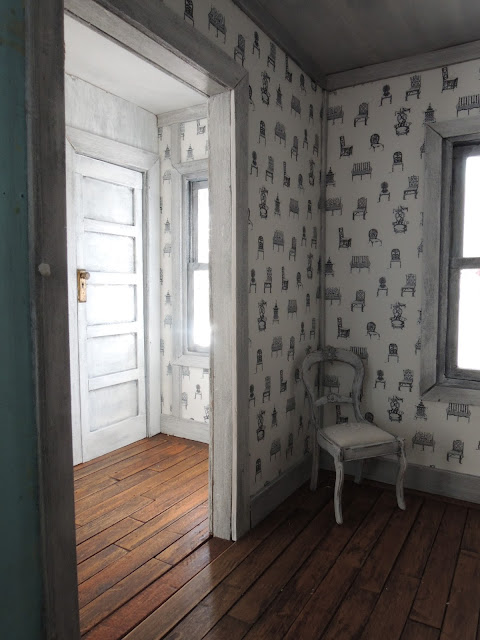 This is looking through from the linen cupboard hallway. 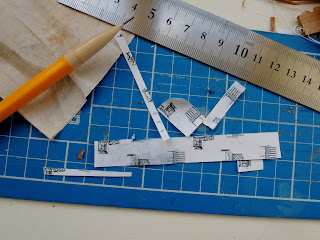 This is all the wallpaper I have left!

I was asked how I layered the linens in the cupboard... 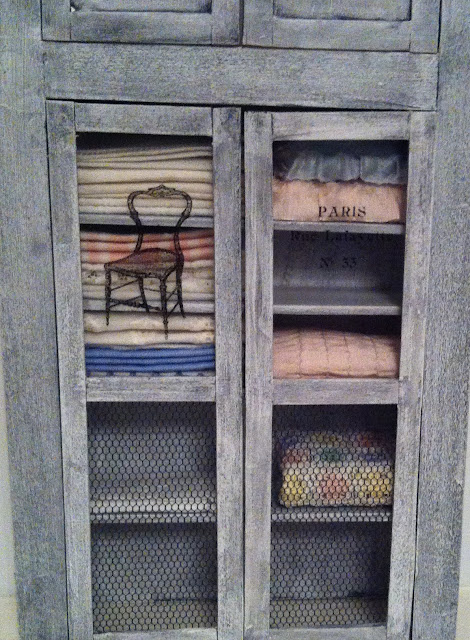 Here's how the linens started out. Mostly folded pieces of fabrics ironed as flat as I could get them. I quite liked the look of them all lying there nice and tidy but I went to look in my own linen cupboard for a little inspiration...and let's just say it's not that tidy...so in the interests of realism I pulled the linens out of the cupboard (the dollhouse one not the real one - haven't got time to fix that when there's miniatures to be made!) 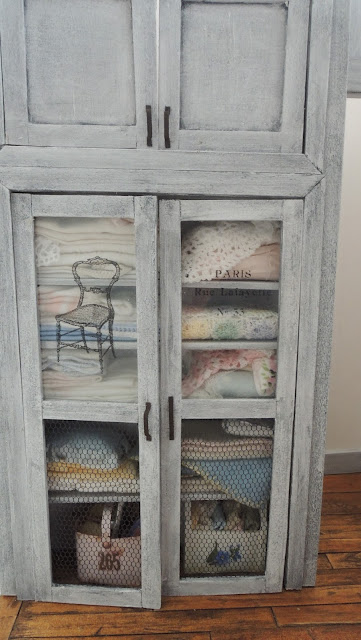 I used tweezers to pull pieces of fabric out from the stack as I held it with my fingers then I glued the fabrics together using a toothpick to push glue between the linens. I clamped the piles together when necessary so they would stay as flat as possible.
Really the best piece of advice I can give is to look at real linens and see how they fall. 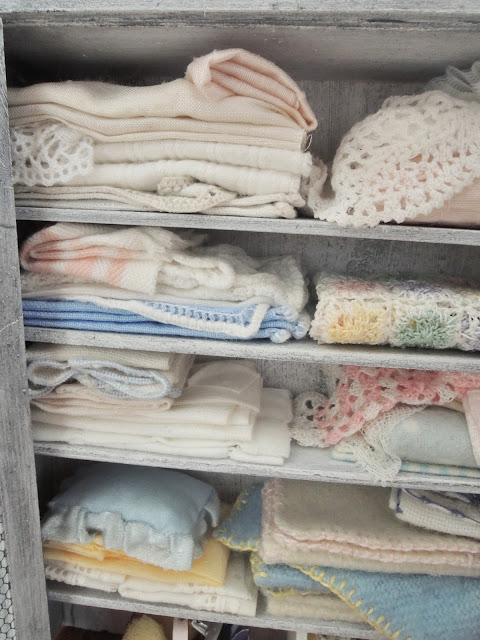 One or two things aren't glued like the pink and white crochet blanket, it's lovely and soft and just stays there on it's own.
And the edge of the blue blanket above needs sticking into place. I didn't see it had popped out until I'd taken the photos - very, very annoying!