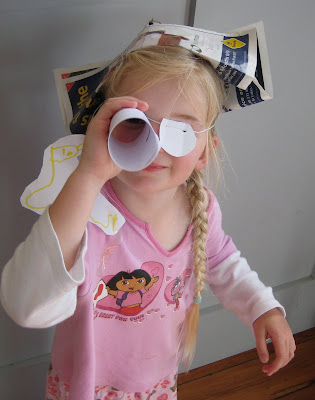 My daughter never ceases to amaze me with her creativity, I guess it's in her genes. The other night she was larking about being a pirate when she suddenly ran inside and asked for the sticky tape and scissors. She grabbed some paper and all on her own started making pirate accessories. First she rolled a piece of paper into a telescope, then she cut out an eye patch and got her dad to attach a piece of string to it. Then I saw her trying to stick something on her shoulder only to find she'd drawn herself a parrot! Obviously the ultimate fashion accessory for any self respecting pirate.
Love, love , love the parrot!
Ah, yes...the (creative) force is strong in this one. 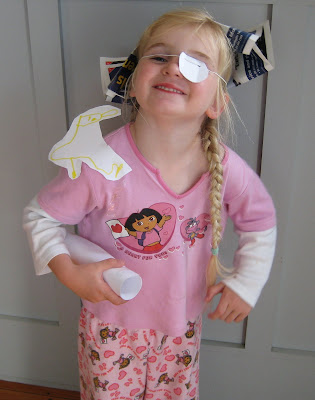 We almost had a crisis when she asked me to fold her a newspaper pirate hat. I couldn't find any newspaper. Luckily 'tis the season for mega tonnes of junk mail and I found a brochure with big enough pages for a hat. She didn't believe it would work because it wasn't real newspaper but was pretty happy with the result and we heard plenty of, "arrrr, me hearty's" until bedtime.
Oh and by the way, the only reason she's into pirates is because her brother watched nothing but 'Pirates of the Carribean' dvd's for months. She was completely fascinated and is always asking about Davy Jones heart!
Posted by Mercedes Spencer @ Liberty Biberty at 6:39 AM No comments:

The smallish things in life!

The other day I was at my friend Frederica's work. Freddy and her husband own a factory that makes acoustic tiles. I was sitting at her desk - a great place to sit because they have a lolly jar right there - when I spied what looked like a lovely white frame but which turned out to be an acoustic tile. I asked if I could take one home, Freddy looked at me like I was crazy (but she really knows that I am anyway) and said of course I could take as many as I wanted.
The next day was Freddy's birthday so I turned that tile into a frame full of little bits'n'pieces. It was great fun finding little things to put in it. 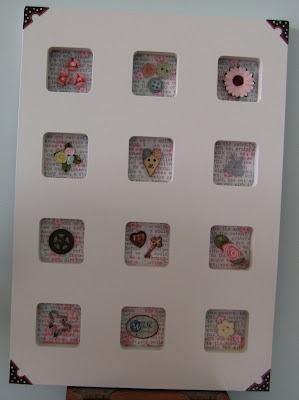 A couple of close-ups. 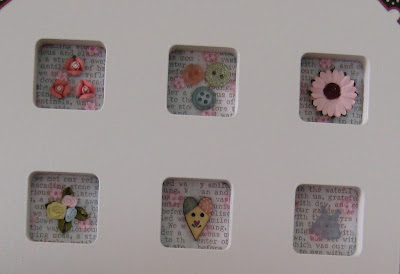 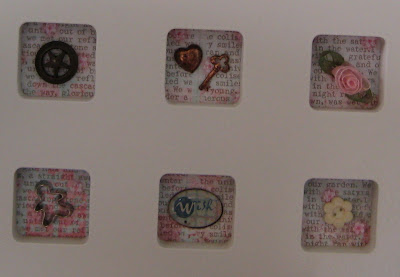 I was a bit worried that Freddy would look at it and just see an acoustic tile but she almost cried when she saw it! We both have dollhouses and tiny things are very important to us!
I didn't actually have to buy anything to put in it I had all that stuff! I just love it when I use up stuff I already have, it means I can justify buying more. I was going to put little furniture in it but the spaces are only 3.5 cms square (that's not quite 1 and a half inches) and a lot of the tiniest furniture just wouldn't fit. But I'll find a way. Next I have to make one for Liberty and maybe all her cousins will be getting them for Christmas...and maybe mum would like one...
Posted by Mercedes Spencer @ Liberty Biberty at 7:51 PM 2 comments:

Well, here we go! Finally after months of thinking about it I have a blog. Thanks to all the encouragement from Autumn and inspiration from the many fabulous blogs I visit.

Many (far too many) years ago I read a quote from Theodore Roosevelt which said,"Do what you can, with what you have, where you are." That quote has stuck with me and really sums up most of the crafty things I do.

My father-in-law recently gave me a huge bag of parquet flooring that he hadn't used in the house he had just sold. I have a dollhouse (more about that another time!) and he thought the small strips of wood may have been useful for making miniatures. After a few days these little number houses are what I came up with. I've put magnets on the back of them but they can also be blu-tacked on to the wall. And here they are on the wall in my daughter's room. She's four years old and just loves them. 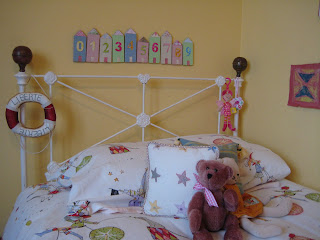 And here's a close-up. You can probably tell I'm a scrapbooker but more about that in the future too! Sometimes I even surprise myself with what I come up with! I couldn't believe how cute these turned out.

So hopefully with this blog I'll be able to inspire a few more people to do what they can, with what they have. It's really all about having fun and making pretty things!