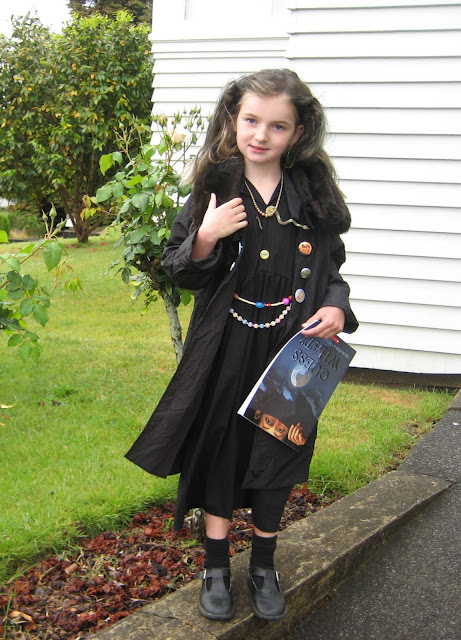 Last week was 'book week' at Liberty's school.
On Friday they had to dress up as a character from a book.
Liberty chose to go as 'a crazy old lady called Daisy O'Grady'. 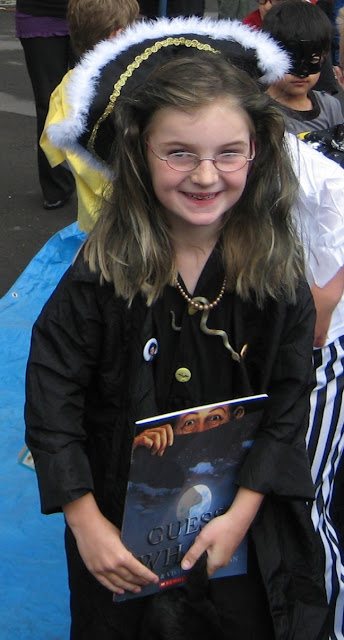 Daisy is a rather witchy character in this book.
I made the costume on Thursday - nothing like a last minute rush.
(the fluffy thing above Liberty's head is a pirate standing behind her, lol!) 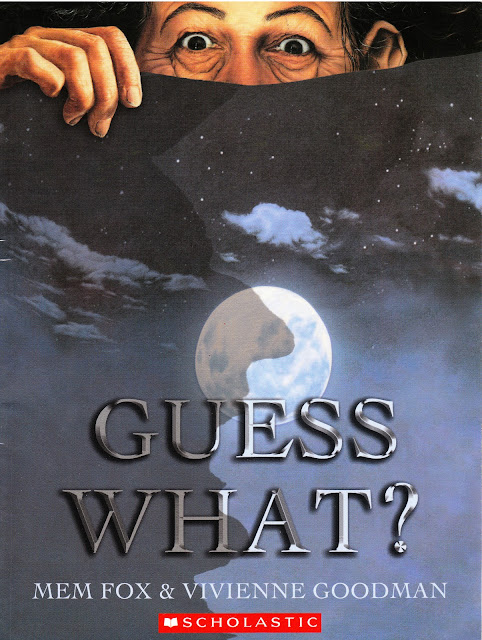 This book came free when Scholastic Book Club couldn't fill our order earlier in the year.
It has the most wonderful detailed illustrations. 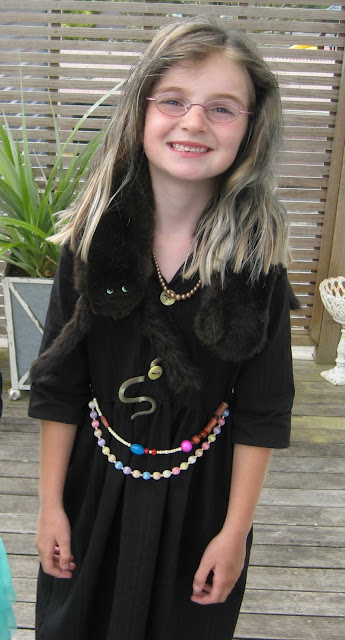 Liberty's a details girl (funny that!) so it had to be just right!
One of the bead belts came apart just before we left for school and had to be threaded back together in great haste! 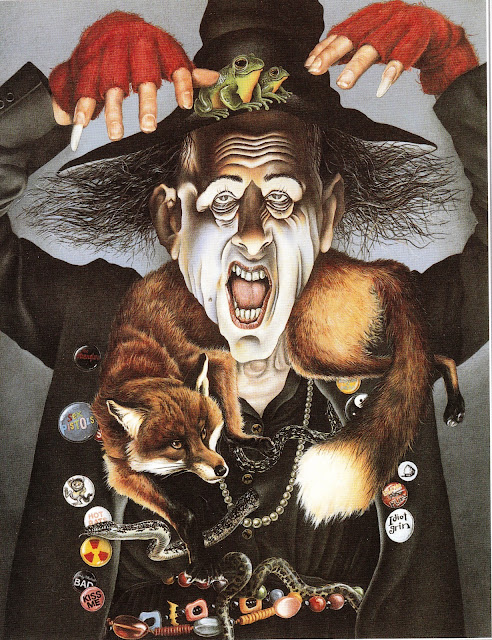 Here's Daisy from the book.
Liberty didn't want a hat, she was worried she would put it down somewhere and lose it.

I found some bat stickers in my scrapbooking pile so was able to re-create Daisy's buttons. 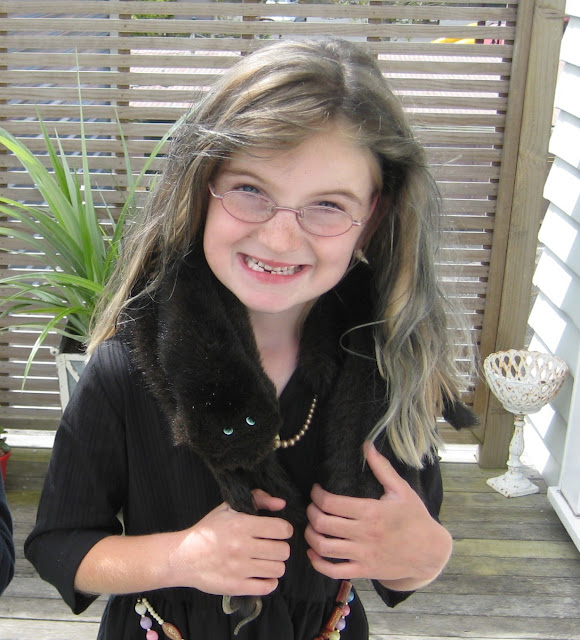 Most challenging part was making a fox!
I've had that (synthetic) fur lying around for years...knew I'd need it someday. 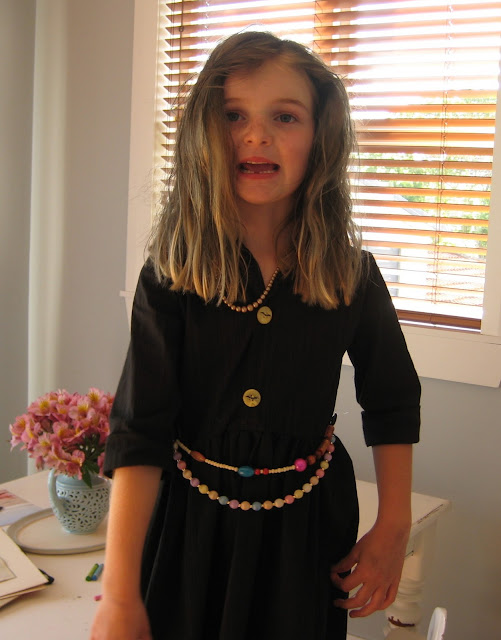 I made the coat (top pic) from some fabric that was given to me and only had to buy the dress fabric.
Total cost of the whole outfit was just $6!!! I had everything else.
And another $2 for the can of black hairspray - which was the most important part of the look for Liberty!
Liberty won the prize for the best girls costume in her class! 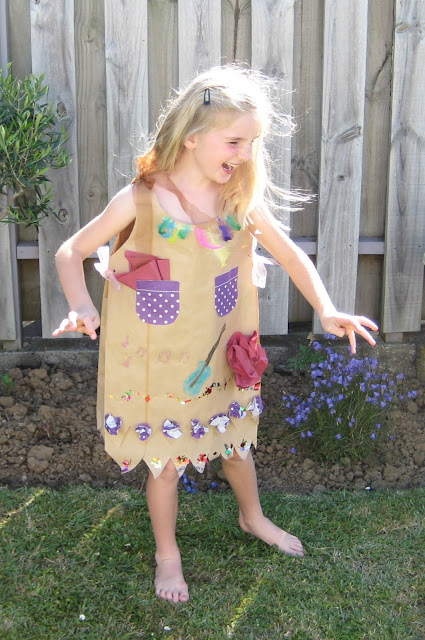 On Tuesday the teacher read 'The Paper Bag Princess' and the children were all given a paper rubbish bag to make into an outfit of their choice.
I went and helped them - absolute chaos!
This dress was all Liberty's own design. 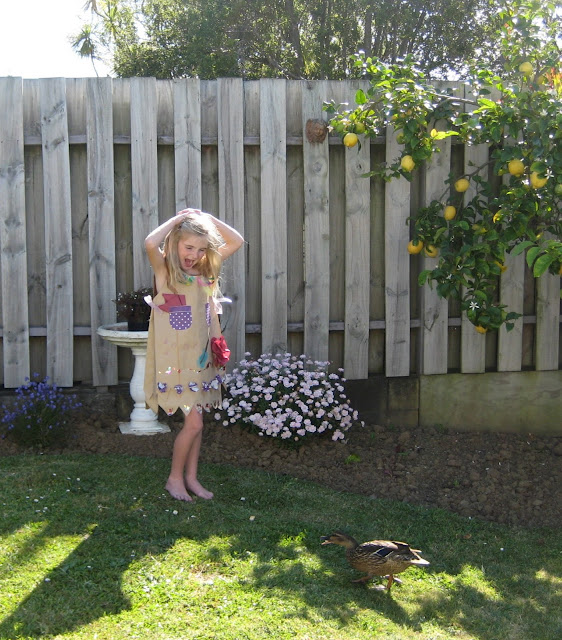 Here's what she's laughing at - two ducks came to visit us in our backyard today!
Mercedes
Posted by Mercedes Spencer @ Liberty Biberty at 5:34 PM

Labels: Around the house