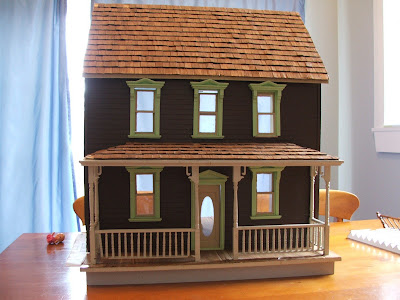 When I was a kid I built my own dollhouse from wooden tomato boxes and made every piece of furniture in it, mostly from matchboxes. Almost three years ago I was looking for a doll for my daughter's birthday on an auction website when I decided to have a quick look at dollhouses. I really had no intention to buy one I was just looking. However, this one caught my eye, it was about 45 years old and was being sold with some furniture and desperately needed someone to look after it. I couldn't stop looking at it and decided after a couple of days it was meant to be mine. I won the auction then had to wait a couple of weeks for it to arrive. 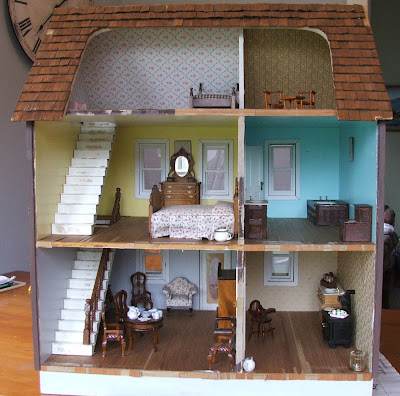 It was pretty obvious that it needed a total renovation. I remembered my mother taking me to a miniatures club meeting when I was about 12 (a friend of hers was a member there). So I decided I should try and find a club so I could get some information on how to renovate properly. Believe it or not the club I found has been meeting once a month for the last 27 years just a couple of streets away from where I live!

Most of the members of the club are well into their retirement years, the knowledge they have to share is invaluable. Almost two years ago Frederica joined the club. She's Dutch and could almost be the Dutch version of me! We have had nothing but fun, fun and more fun together since the day we met! 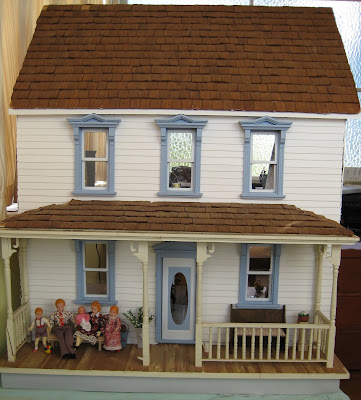 Here's the outside of the house as it is today. It's still a long way from finished but a fresh coat of paint has really livened it up. You may notice the front porch railing is now missing. That's due to a little confrontation Liberty had with the porch a while ago. I do still have all the bits. I can't say I enjoyed painting those windows, I had to pull them all to bits (they were well glued in) and it was like a mammoth jigsaw puzzle trying to put them together again. The front door was broken and had been glued shut when I got it because the hole for it wasn't large enough. It was a great triumph to be able to get the door to open. I want to keep as much of the original stuff in it as I can because it feels like it has a history.
I have re-wallpapered the house and am trying to finish the flooring (which I am not enjoying). The next big challenges are the stairs and then trying to light a house that is already built. Once finished this will be Liberty's house. She already plays with it in it's partially renovated state. I'll show you how the interior's looking in another post.
Having seen all the beautiful houses other people in the blogoshpere are working on I just really want to get this finished so I can start on something special just for me!
Posted by Mercedes Spencer @ Liberty Biberty at 7:13 PM