Who would have thought I'd be neglecting my blog so soon! All I can say is that it's a very crazy time of the year...so many projects to finish before Christmas and every day a new idea pops up of something else to be made. And way too many friends of mine have birthdays in December. Yep, I know I do too, but at least mine's after Christmas! 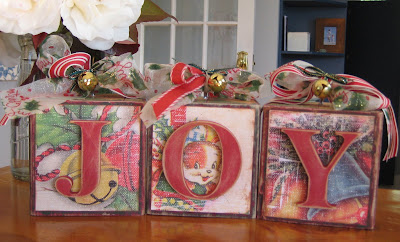 Anyhow, here finally is a pic of the blocks I made for myself. I just love, love, love Daisy D's papers, so that's what I used for mine. They're sitting on our servery so I made sure they looked pretty all the way round. 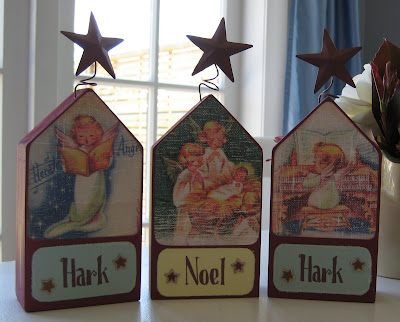 And here's something else I used the Daisy D's papers for. I made these Christmas houses to sell so I wouldn't feel so bad about spending way too much money on all the papers!

The tin stars on top were from a wire garland-ish thing that was meant to go around a Christmas tree. I bought it a couple of years ago in an after Christmas sale and then never really liked it that much, thankfully it was exactly what I needed for these.


The houses were made with more offcuts from Freddy's factory. I got managed to get hubby to cut them into house shapes for me. 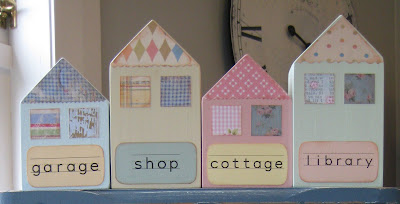 Was also selling these little lovelies at a market last weekend. A little girl came along, she would have been about 10 years old and she absolutely loved these little houses. She called her mother over to look at them and then later her father. Then both her parents together. Sad to say her parents were pretty disinterested and I was feeling really bad for her. However about half an hour later she returned with her mother to buy three of them. She said she had to have the library, she wanted a little row of them for the desk in her room. So I said she could have an extra one for free, the hapiness on that kid's face was priceless. I was pretty happy too, that someone loved something I had made just as much as I did.
Posted by Mercedes Spencer @ Liberty Biberty at 7:35 PM