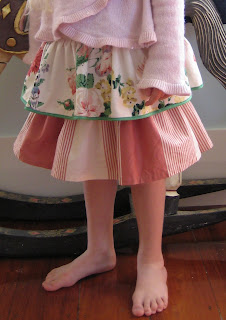 I made this cute skirt for Liberty a couple of months ago. I used furnishing fabrics because I really wanted to make it but was looking after a couple of other kids that day and just had to use whatever I could find.
For some weeks I've been trying to make her another ruffle skirt. Originally it was to have been to wear for Christmas but after thinking every night up until Christmas Eve that I was going to have time for sewing it just never happened. Not being able to find the right fabric was also a large obstacle. Fortunately, she didn't have to go naked for Christmas as I remembered she'd only worn her birthday dress once and although her birthday is in winter (and Christmas here is summer) the dress was sleeveless so it worked perfectly. Even cuter because her little cousin had the same dress! 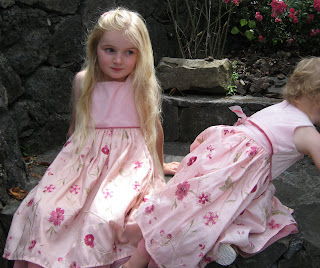 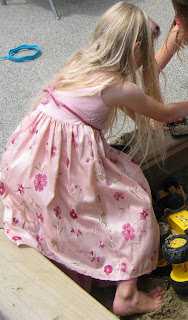 And look at that! She even considered her beautiful dress to be versatile enough to go from church to Christmas dinner to the sandpit!

So Christmas day came and went and still I thought I would make her a skirt for my birthday (December 28). She had a new top and I thought maybe I could find some fabric to go with it. I left the Boxing Day sales to those with more money (or maybe credit) than I but headed of to the local fabric store on the 27th after seeing they were extending their 20% off everything sale for another day. The husband gave me time off for good behaviour so I was able to go out on my own, ahhhh, what bliss! I almost turned around and went home when I got to the carpark at the shop, it was lookin' pretty full and the service in there is notoriously slow at the best of times, however I reminded myself that I was ALONE and wouldn't have anyone tugging on my skirt or crying because I wasn't buying any overpriced 'Dora' merchandise.
I even remembered to take the new top with me and after about half an hour of uninterrupted searching through about a hundred bolts of fabric found something perfect. Then unbelievably I was served within 30 seconds of arriving at the counter, that never, ever happens there!
I got home and thought 'I'll start that skirt tonight ' but of course by the time I'd cleaned up after everyone for the fiftieth time that day I was much too tired to think of sewing. So I thought I'd make it the next day before my party. MY party, har, har! Every year my husband invites everyone around for MY party and I spend the day in the kitchen preparing for it...and this year was no different. I didn't let go of my dream to make the skirt until 3:30 though (guests were arriving at 5pm). 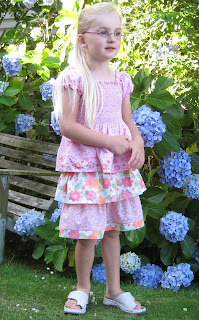 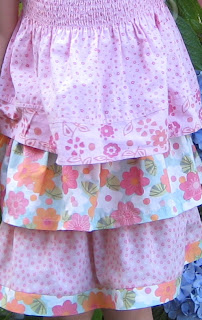 However 2 days later I acheived the almost impossible, I made not one but two matching skirts! The second one is for Liberty's 5 year old cousin. In a perfect world I'll be able to find her a matching top. (Liberty's top was $6.99 down from $24.95!! - now that's a bargain in any currency!) So it became a New Year's Day skirt! The pattern can be found here, it's really easy, no really it is easy I wouldn't have made it three times if it wasn't!
I'd like to say I'll make more time this year for all the things I love to do but being a realistic sort of mother I know it'll never happen...so once again I'll just go with the flow and do what I can, with what I have, when I get the time!
Happy New Year!
Posted by Mercedes Spencer @ Liberty Biberty at 9:42 PM