How'd she make that?!

Thanks for all the lovely comments on the garden!
Today I'll show you how I made some of the things in the garden. 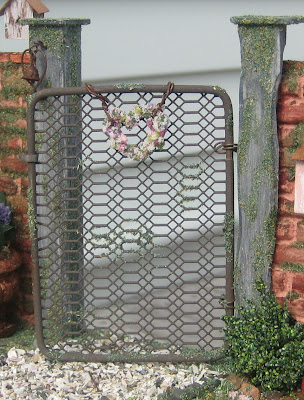 I'll start with the gate because so many people want to know how I made it. I didn't actually have to do much - it was a lid of one of these mesh boxes that I found at the Japan shop. I couldn't believe it when I got it home it was exactly the right size for the gap I had left in the fence! It was even 'rusty' already, I just glued a bit of fake grass (from a model train shop) here and there on it to look like moss. 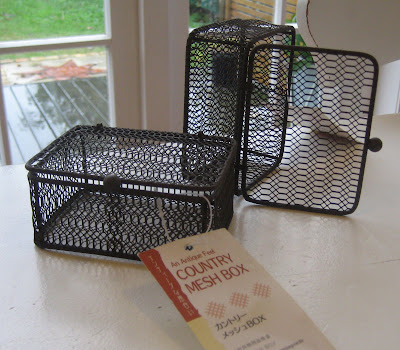 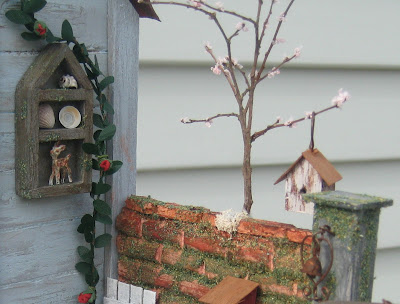 The gate posts are made from balsa wood as is the shadow box which was made by Katie. I painted them all in an old weathered wood style and added some fake grass for moss again. 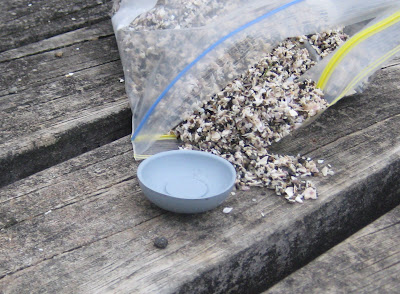 The pond - I started with one of these little 'things' I don't even know what it is really for, it may be something off the bottom of a chair leg. I just bought a couple of them one day in case they had some future use. I glued shells I collected from a beach in it, I found a beach that had the tiniest crushed shells, it was easier than trying to crush them myself. The fish was silver and black when I bought it but it was too hard to see on the shells so I repainted it. Then I just cut some clear plastic off some packaging that was lying a round to cover the top with. I've put some tiny bits of the plants that are ' growing' around the pond on top and it looks like they're floating on the water. 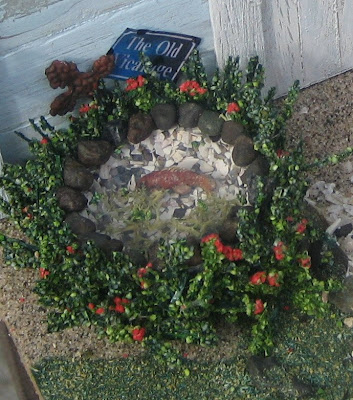 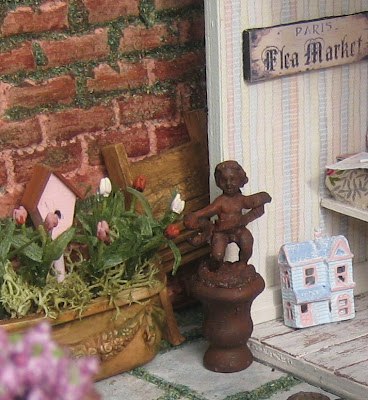 The statue was part of an old metal hairclip that broke some years ago but I couldn't bear to part with it (I bought it in Canada). The base is just a ceramic vase. I used Blu-Tack to stand the statue in the vase. I painted the whole thing rusty - I have discovered I LOVE painting things rusty! 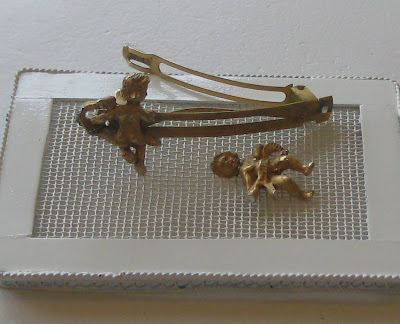 The brick wall is made from terracotta coloured Das modelling clay. A lady at the miniatures club made a mould of the wall and we just pressed the clay into it. It dries quite a light colour so it needed painting, I threw a bit of fake grass on it too - I love using that stuff! It makes such a difference to the look of a piece. 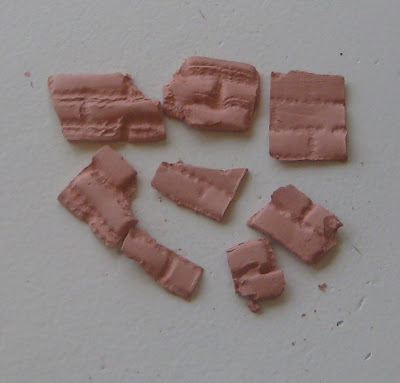 The tiny bells are actually called 'Liberty Bells' I bought them years ago. The rusty wire I twisted to make the hearts was in a scrapbooking bargain bin, it has been very useful. 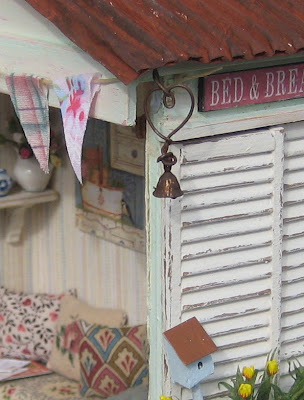 The trees are twigs from the same tree in the park where I found my Easter branch. I was wondering how I could add foliage to them without having to make ten thousand leaves. Then I remembered I bought this flower making stuff at our club once, I have no idea what it is called, I have tried making flowers with it but it's far too chunky. However, for spring foliage and blossom it is perfect! 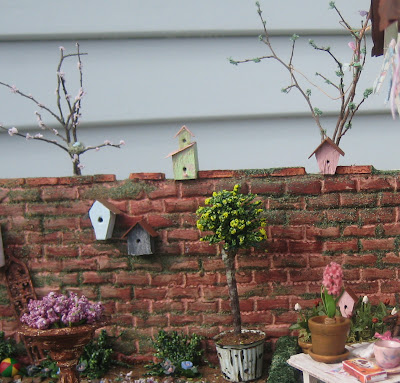 The box hedge is made from a piece of Oasis and sprinkled with the grass and some of the chunky flower stuff, it could have done with a bit more of the chunky dark green stuff but I only had a little bit of it and someone opened the door while I was making it and all my green stuff blew away!
The topiary tree was made from the top of a larger tree that I bought at a model railway shop, I used hot glue to attach it to a real twig for a better looking trunk. All the dirt is dried tea leaves.
So hopefully all that helps anyone else out there who wants to make a little garden. If there's anything else you want to know, just ask!
Mercedes
Posted by Mercedes Spencer @ Liberty Biberty at 9:00 PM