First let me say a big THANK YOU to all the lovely people who have passed awards on to me recently. I'll be back to collect them after my miniatures show which is next weekend. At the moment I'm working like a mad woman to get the house as ready as possible for the show. Which is one reason I have been making Sylvia's tulips like crazy! The actual dollhouse will be pretty much finished but the interior details will not! I have niether the time, the energy nor the money to get it 100% complete within a week. 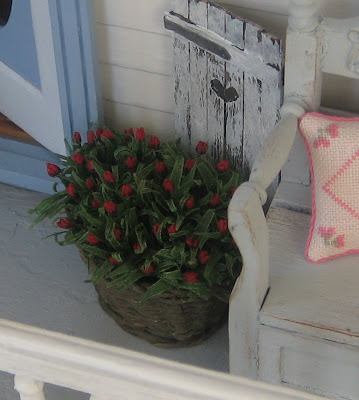 So my clever plan is to have as many flowers in the house as I can...perhaps people will notice all the loveliness and not the things that are missing...like the oven. LOL!
I LOVE Sylvia's flower shop and all the baskets of flowers she has everywhere so I decided to fill the big basket I made with tulips. I discovered it takes a LOT of those teensy tulips to fill a basket that size. I'm thinking that maybe one day I'll have to make the porch of the house into a flower shop. Of course I will have to learn a few more flower making skills! 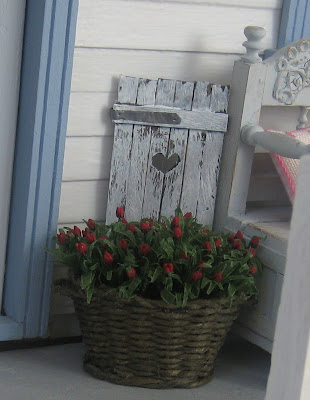 I was trying to paint them while I was on the telephone (no, it wasn't easy) when Liberty came and took the paintbrush from me and had a go herself. I tried to tell her not to because it was very delicate work, however being only four years old she took absolutely no notice of me and proceeded to paint them very carefully. She actually did a far better job than I expected! Only she got bored pretty quickly. 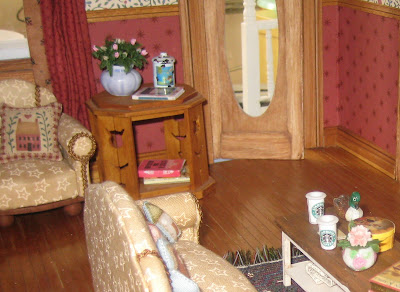 Pink and white tulips in the lounge. Sorry for the bad photography, everything is being done in a great rush these days. That bowlful of tulips actually looks much better in real life! 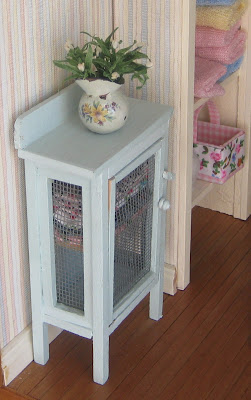 Tulips in the laundry! 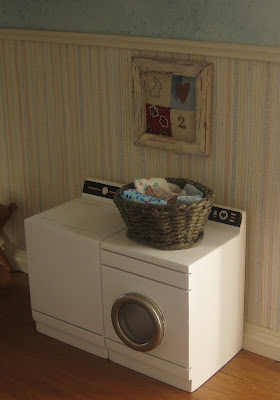 Oh and very late last night I made a laundry basket which I forgot to put handles on. I can probably still make them or maybe I'll just drape the washing over the edges.

I only had two tulips left over from the pink batch so I threw some multicoloured flowers in with them for now. They are in the nursery. Of course no real mother in her right mind would leave a vase of flowers that low down in a childrens room. LOL! 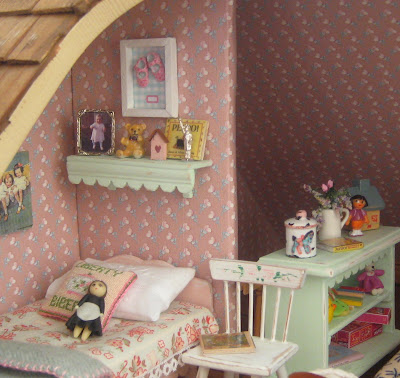 When I was in Melbourne last week I found the little statue of Liberty that you can see on the shelf above the bed there. It's a silver charm for a bracelet so it cost a ridiculous amount of money, it's less than an inch tall. There was a slightly larger more detailed one for three times the price, but this will do for now. Liberty was SO excited when I gave it to her, it was so funny. We didn't name her after the statue 'Liberty' was just a name we loved. But she calls it 'the statue of me'. And when she has an ice cream in a cone she'll hold it up high and say,"who do I look like?" 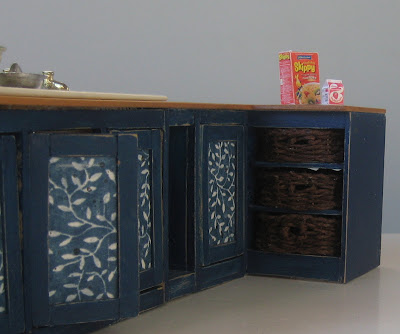 And finally I have made baskets for the drawers in the kitchen. All along I've wanted baskets in there and now I have the technology I have made them! Yippeeee!

I've been asked what sort of string I used to make the baskets and it's actually 'hemp' string but in the tutorial (link is in the previous blog entry) she says she uses kitchen string. Today I found some coloured paperish string so I'm going to give that a try. And if you go to the site with the tutorial and want it in English you need to go to her home page and there's a translate button.
Once everything is organised in the dollhouse and ready for the show I'll take some proper pictures and show you all the rooms. Sorry to keep you waiting Sans! These 'teasers' will have to do for now!
Mercedes
Posted by Mercedes Spencer @ Liberty Biberty at 10:46 PM